Clan Thompson activities in Colorado got their start at the Longs Peak Scottish-Irish Highland Festival in Estes Park, and it has been one of our best venues ever since. We participate in a number of festivals and games in Colorado, but this one is the biggest. We met plenty of old and new friends and cousins and had a great time in this setting, which is so reminiscent of the highlands of Scotland. 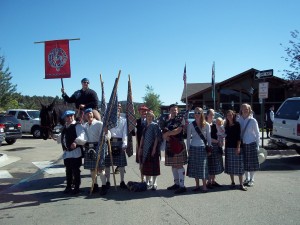 We were honored to have so many Thom(p)sons marching with us in the parade, including Satin, the wonder horse.

One of the highlights of this festival is the parade through downtown Estes Park. People line the streets eight and ten deep to watch the clans and bands pass by. We had been saying for years that Thompson is a riding clan, and therefore we should ride horses in the parade. We finally managed this year, and led off our contingent with a Percheron mare named Satin, who helped carry our banner proudly. She was the hit of the crowd. 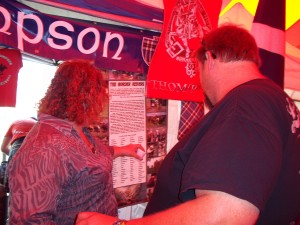 Visitors to the clan tent were fascinated by the poster describing Reiver families.

We’ve also been very gratified with the response to a poster explaining about Reiver families, made by Mary Thompson. Many people stop by and are entranced to see their family name among the riding clans. It’s a great conversation starter, and helped us cement relations with many of the other Reiver clans. 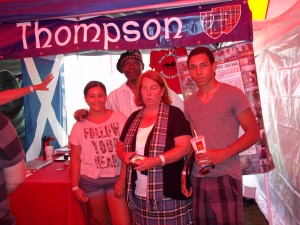 Byron Thompson and his family stopped by to chat at the clan tent, as they have done many times in the past.

It’s always good to renew acquaintances at these games, and this one was no exception. Byron Thompson stopped by the tent some years ago and has been a member ever since. He works in the Tartan Information tent, and took some literature to add to their files about the history of Thompson and our tartans. 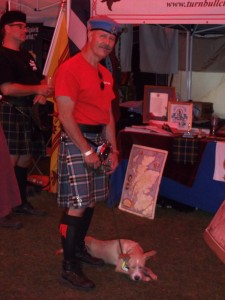 One of the highlights of the Estes Park festival is their focus on dogs. There are events where dogs herd sheep and perform complicated tasks. There are booths where different breeds are highlighted. And there are even some rescue dogs available for adoption. Parker and Jeanette Thomson couldn’t resist the charms of one particular Irish Terrier, and so Dougal Thomson became the newest member of the clan.

Parker Thomson does the sword dance, accompanied by Sean Thompson on the pipes and a member of a nearby clan on bodhrán.

With the Colorado Thom(p)sons, there’s always music, and this year was no exception. We had some informal sessions at the tent, including one where Sean Thompson, our official bagpiper, began to play. Then Parker Thomson began to dance, and we even recruited a drummer from a clan down the row to join us. Always a good time to be had, and we hope we advanced the cause of Clan Thompson at this year’s games.