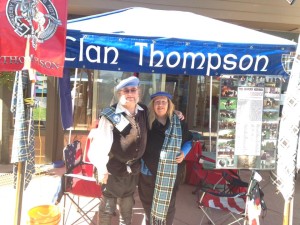 Clan Thompson Colorado was proud to meet many of those interested in family history at the games.

Your Colorado Thompsons were proud to be part of this gathering in beautiful Snowmass, a mountain tourist village and ski resort at more than 8,200 feet elevation. I must confess the altitude got to me, even though I live more than five thousand feet above sea level myself. I was very grateful for the help of some of the other clans in hauling our baggage back to the car at the end of the festival.

Snowmass is an interesting event. This festival was held for many years in Highlands Ranch, a south Denver suburb, but it just got too expensive and the organizers were considering cancellation. But then, they were put in contact with the authorities in Snowmass, who made some very generous offers and brought us to their community. Many of the clans from Denver and Colorado Springs think it’s too far to travel, but a number of us have made it anyway. This is the second year in Snowmass, and Clan Thompson has been there both years.

Last year, it was held in a park, but that was small and crowded, so they opted for a very original plan this year, we were right on the Village Mall, tucked in among the stores. We saw lots of tourists who were just visiting for the day and didn’t even know there was a festival. We also got visited by some Thompsons who were familiar with us from other games around the region. One retired fellow from Grand Junction was wearing his red Thompson shirt, which he said he’d bought from Parker last year in Estes Park.

The weather was good for the most part, except for Saturday afternoon, when the heavens opened and we thought we might drift away like Noah’s ark. True to the tradition of mountain thunderstorms though, it passed by and we were none the worse for wear.

All in all, a good experience, and we’re looking forward to the big even in Estes Park next month.