The St Andrew Society of Colorado has announced the move of their annual Colorado Scottish Festival back to the Denver Metro area in the City of Edgewater. The festival was held in Highlands Ranch for many years, until that venue became unsuitable and it moved to Snowmass. That town provided a friendly and beautiful setting, but some attendees disliked the distance from the major population areas and the cost of a mountain resort. It appears the Society listened to their concerns. 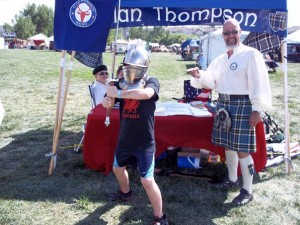 Everybody wants to be a Reiver when the Thom(p)sons are around.

Chieftain, Timm Herrod says, “We want to make everyone who attends feel like they have stepped into Scotland for a day. Expect all the classic elements of a world class Scottish Festival and Highland Games: the crowd-pleasing Scottish heavy athletics caber tossing (the ‘telephone pole’ event), the swirling kilts and leaps of Scottish Highland dancers, Scottish country dancing, the stirring spectacle and haunting tunes of pipe bands from around the state, whisky tastings, Clan Village, Colorado’s own Renaissance Scots, living history, Scottish food, British Dogs, British Cars, Parade of Clans and so much more!”

The St. Andrew Society states, “Our mission of sharing traditional Scottish culture and innovative Highland Games remains our passion. We couldn’t be prouder to continue our popular and unique event with our Edgewater neighbors.” There was another event in Edgewater, but it was canceled last year to to organizational difficulties.