See you in Estes Park! 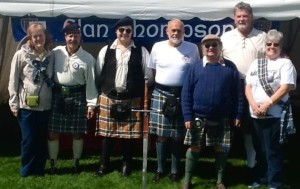 Clan Thompson has had a presence in Colorado since Tom and Mary Thompson traveled here from Tennessee in 2008 to meet up in Estes Park with Dan “Booner” Thompson who had been appointed Colorado Commissioner the previous year. They met many people interested in the history of our clan, which is documented back to the 1500s at least, and certainly existed before that.

Because of the event, the annual gathering at Estes Park, officially known as the Longs Peak Scottish Irish Highland Festival, has held a special place in our festival season.  We hope you can stop by booth #60 in the Lower/North clan tent and say hello to some Thom(p)son cousins. The festival runs September 5-8 at the Fairgrounds near Lake Estes. There are many enjoyable events and lots of great music, besides the opportunity to help us continue the growth of Clan Thompson in the Rocky Mountain area. Hope to see you there.