Colorado Thom(p)sons were well represented at the 2013 Rocky Mountain Highland Games and Colorado Scottish Festival, August 10 and 11 in Highlands Ranch Colorado. Winter Park residents Parker and Jeanette Thomson spent a fun day with us Saturday, despite the heat, which was even worse for them, coming from the cooler elevations as they do.

From left, Lowell Thompson, ready to compete in the games, Michael Thompson, Colorado Commissioner, and Sean Thompson, our official bagpiper.

We talked to a number of Thompsons, some of whom we had met at previous festivals, and explained a lot about the history of the Border Reivers. Many Americans are unfamiliar with this part of our Scottish heritage and are fascinated to find their names on the list of Border clans.

Lowell Thompson sports his Clan Thompson tee-shirt and the silver plate awarded him as best athlete overall at the festival.

Thompsons were represented musically by the band, Mulligan Stew, in our second year at this festival, athletically by Lowell Thompson, who took first place in a number of events and was named Best Overall athlete for the competition. 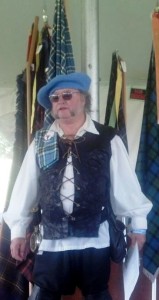 Colorado Commissioner Michael Thompson officiated at the Kirking of the Tartans Sunday morning.

One of the highlights of these festivals is the camaraderie of the other clans, along with the pageantry enjoyed by the spectators. This festival is particularly friendly to the clans, and always takes good care of us. Hope you can join us at a future event. 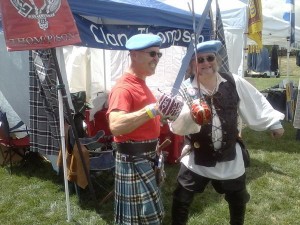