We hope you can join us for Colorado Tartan Day, Saturday, April 6 in McIlvoy Park. That’s in Olde Town Arvada and has been the site of this festival celebrating Scottish culture for several years now. 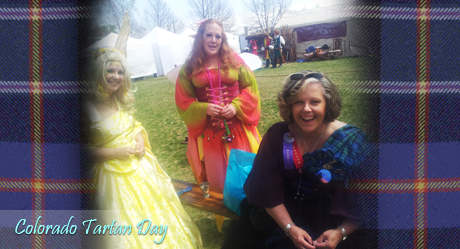 Colorado Tartan Day is a wonderful celebration of our Scottish heritage

Tartan Day is a celebration of Scottish heritage on April 6, the date on which the Declaration of Arbroath was signed in 1320.

In 1982, under the auspices of the New York Caledonian Club, New York State GovernorHugh Carey, and New York City Mayor Ed Koch declared July 1, 1982, as Tartan Day, a one-time celebration of the 200th anniversary of the repeal of the Act of Proscription of August 12, 1747, the law forbidding Scots to wear tartan.

On March 9, 1986, a ‘Tartan Day’ to promote Scottish heritage in Canada, was proposed at a meeting of the Federation of Scottish Clans in Nova Scotia.[1] Jean Watson, President of Clan Lamont, petitioned provincial legislatures to recognize April 6 as Tartan Day.[1] The first such proclamation was by Nova Scotia in April 1987; other provinces followed suit until Quebec was the last to fall in line, in December 2003.[1]

In Australia, wearing tartan on July 1 has been encouraged since 1989. The day has been promoted as International Tartan Day in Australia since 1996[2] and has been formally recognized by many states, but not at national level. The United States Senaterecognized April 6 as Tartan Day in 1998.

Come join Clan Thompson Colorado and other Scottish clans, along with the Renaissance Scots, vendors, bagpipe bands, musical groups, dancers and much more, 9 am to 5 pm in Olde Town Arvada.