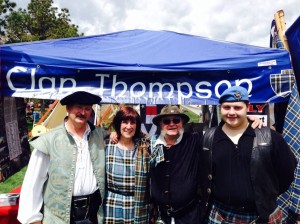 Clan Thompson Colorado was represented at the Pikes Peak Celtic Festival in Colorado Springs over the weekend. This is our first time at this event, which was revived last year by the organizers of a similar festival that was suspended in 1999. Many of the attendees were grateful for a Celtic event in this area of Colorado, which has been underrepresented in recent years.

Albannach was the headline band, and there was lots of other great music besides food, drink and vendors. Of course, the clans were there and Thompson was at the head of the line. Our genealogist/family history expert, Maggie Jones was a very popular partner for conversation as so many people were unaware of their roots and history. Many interested people stopped by the clan tent for a chat and a dram of Scottish hospitality.

We are hearing good things from the headquarters of Clan Thompson International about the enthusiasm of Thompsons in Colorado, and we’re looking forward to continuing that momentum. If you are not an official member of Clan Thompson yet, now is your chance to sign up. If you are, get on the Forum and let the rest of the Thom(p)sons worldwide about the excitement building in Colorado.