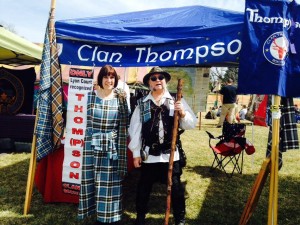 Our first official festival of 2015 will be Colorado Tartan Day, Saturday and Sunday – April 11 & 12, 2015 in Longmont, Colorado. Clan Thompson is on the schedule, and we plan to represent the Reivers to the best of our ability. This year, the festival expands to become a two day event, with even more enjoyment than before.

The festival will be held in Roosevelt Park at  700 Longs Peak Ave. Longmont, Colorado. Hours are 9 am to 5 pm Saturday and 9 am to 4 pm Sunday. Click here for Google map directions.

Admission is Free to the Public

Tartan Day commemorates the signing of the Declaration of Arbroath in 1320, which asserted Scotland’s sovereignty over English territorial claims, and which was an influence on the American Declaration of Independence.

Canada has been celebrating “National Tartan Day” since 1993, the United States since 1997. The idea and motivation for creating a similar American holiday was provided by the Scottish Coalition, a group of national Scottish-American cultural organizations.